You can purchase Septimania here

or enter our giveaway here! 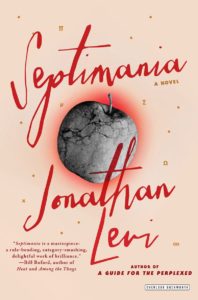 One garden. One tree. Two backs against the trunk, two bums on the grass, two mouths sharing a pipe after dinner.

London is burning. Plague is riding flame and smoke, and the early August sun radiates death north to Cambridge. Henry VIII stands in stony guard over the silent Great Court of Trinity College, students dismissed until further notice. Further north still, in the garden of Mrs. Hannah Newton Smith, one of these students, her strange scholar of a son, sits with a friend. I am that friend, a foreigner—some traits cannot be disguised. But a foreigner who can think of no better way to weather the closing of the university than to share a pipe and a tree with friend Isaac.

“I was a posthumous child.” Isaac blows a puff, the smoke mixing like China tea with the granules of sunlight, and passes the pipe to me. “I never knew my father, and the feeling was mutual. I was born Christmas morn, so small, I am told, that I fit in a quart pot, and so weakly that, when two women were sent to Lady Pakenham at North Witham for some herbal strengthener for my struggling spirit, they sat down on a stile by the way, certain there was no occasion for making haste as I would be dead before they could return.”

“That would explain your healthy appetite.” I take the pipe from Isaac.

“And yet,” Isaac watches the smoke rise towards the fruit in paisleys and curlicues, “I am certain that—my mother’s bitterness notwithstanding—I must, at one time, have had a father.”

“And a Holy Spirit?”

“Fuck the Trinity,” Isaac grabs the pipe from me and puffs again.

“Father, Son, Holy Spirit—for an orphan like me, there is but one Father, one God—finitum—and all that we know, all that we are radiates forth from the One like the rays of the Sun. I suppose at heart,” he smiles a smile that at sunset gives me courage, “I must be a Jew.”

“It isn’t the heart that interests this Jew.” I smile back with a glance at Isaac’s thighs.

“A true Christian, like a true Jew, believes in the single God.”

“The God of Abraham?”

“That’s two gods right there,” I laugh. “Never mind Trinity College and your Trinitarians. You’d be surprised to know how many of my circumcised brethren are Quarternarians.”

“They believe, quite openly, in four deities. Some students of the Kabbalah even hypothesize the existence of seven Gods!”

“Septimaniacs,” I tell him. “Septimaniacs—with a God for each of the seven heavens, for each day of the week, for every direction of space, every planet, every Pleiad, every color, every virtue . . .”

“And every deadly sin,” adds Isaac. An apple falls and lands between my legs.

“Take a bite,” I offer without moving.

“After you,” Isaac demurs. “There are plenty of apples.”

“Precisely,” I say. “Welcome to Septimania.”

Jonathan Levi is the author of Septimania, from which this excerpt was adapted. Copyright (c) 2016 by Jonathan Levi. Published in 2016 by The Overlook Press, Peter Mayer Publishers Inc. www.overlookpress.com. All rights reserved.

Jonathan Levi is an American writer and producer, and author of A Guide for the Perplexed and most recently Septimania. He is co-founder of Granta, and a former Los Angeles Times fiction critic. His short stories and articles have appeared in many magazines including Granta, Condé Nast Traveler, GQ, Terra Nova, The Nation and The New York Times. Born in New York, he currently lives in Rome, Italy.