“Dangling Joe” by Darrin Doyle was first published in Scoundrels Among Us (out now with Tortoise Books) and is reprinted here with permission.

You’re a stranger now unto me Lost in the dangling conversation. And the superficial sighs In the borders of our lives. —“The Dangling Conversation”

A man appeared as a speck against the clouds one morning, high above the city. The citizens were amazed and confused. From the ground they squinted, shielding their eyes. Is that a person? they asked. He was so distant he might as well have been a bag of rocks, which would have been equally amazing and confusing, floating in the air. However when witnesses produced binoculars and telescopes, they could distinguish him as a man. He was simply dangling in the sky. They searched above and below and beside him, seeing no wires, no platforms, and no means of support.

Not one person who looked closely at this man would have described him as floating or levitating. With his head upward and his feet pointed toward earth, he was in a standing position. However, the way his legs swayed beneath him (hips swinging gently side-to-side), and the uncomfortable-looking way he held his arms akimbo, gave the distinct impression that an invisible force was holding him like a yo-yo on a string.

Nonetheless, nobody knew where he came from or what he was doing. His photo dominated all media outlets, yet no one came forth to identify him. He was dressed in an expensive-looking business suit, dark gray with subtle pinstripes. His polished loafers sparkling in the sunlight had been one of the first things that caught the attention of the folks on the ground. Chubby cheeks and a nicely combed head of conservatively parted hair rounded out his appearance. Aside from a bit of forehead perspiration sighted by an amateur astronomer, the man seemed untroubled by his bizarre and terrifying situation. His quiet smile exuded contentment and even joy as his legs rocked limply in the sky.

The city whirled into action. Emergency personnel—firefighters, police, paramedics— arrived at the area below him. Crowds gathered, shouting words of encouragement. They snapped photos, formed prayer circles, and set up hot dog carts. On rooftops of tall buildings, folks held signs that said Don’t fall! and We’re here for you! and How are you dangling like that? Even from the highest point in the city, the roof of a 47-story hi- rise apartment, the dangling man was too far to reach or hear. Not that he was talking or trying to communicate—he was just hanging there like laundry! The firefighters had no way to get to him. They needed a helicopter.

Cautiously and with great skill, the chopper pilot navigated near the man. He maneuvered until positioned thirty feet above. The rescuers unfurled a rope ladder, which flailed and flapped and whipped around until settling. Grab it! they shouted through a megaphone. Inexplicably, the man didn’t respond. He didn’t even crane his neck to look up at the chopper. His arms, though, were in a rather awkward position, which they figured made it tough to do much of anything. The poor guy!

A legendary search-and-rescuer by the name of Doc Ready hooked himself to a safety line and climbed down the ladder. In an acrobatic move, he slid his feet through the rungs and hung upside- down just above the man. Below, the crowd erupted into lusty cheers. What a hero! News reporters prepared the dramatic headlines: Gutsy Rescue Dazzles Thousands of Onlookers; Courage in the Heavens; Noble Man Saves Helpless Other Man—Taxpayers Foot the Bill.

But then an unexpected thing happened: The man simply moved, or was moved, sideways in the air, drifting like a leaf skidding along the pavement. He slowed to a stop about fifty yards from where he’d dangled originally. It looked like whatever was dangling him simply dragged him away with minimal effort.

This pissed off the rescuers, big-time. What the hell was going on? Doc Ready ascended the ladder. Carefully the pilot relocated the chopper, which took about eight minutes, since the winds were unpredictable at that altitude. They unfurled the ladder again. Doc clipped himself onto the safety line and descended, recreated his nifty little flip, extended his hand to the Asian man, listened to another burst of applause (more hesitant this time) from the ground.

The rescuers got the same result. Five more times they attempted the maneuver; five times the man slid away to a nearby location in the sky. By then the sun was setting. They were losing light.

“He doesn’t speak. He doesn’t acknowledge us. He hasn’t been identified. Is he even an American? What evidence do we have that he’s one of us?”

This was a pundit on one of the morning news shows, speaking angrily a couple of days after the man was first sighted. The pundit’s name was Hank Hardwood. He was known for his powerful chin, piercing blue eyes, and scathing commentary about anyone he deemed un-American.

“How do we know he’s not a spy for the Chinese government?” His face during this particular broadcast had lost its usual orange glow. In its place was a fiery red that practically emanated heat from people’s TV screens. “He could have cameras and recording devices stuck everywhere on his body, sending classified information to his leaders, and here we are treating him like a damn hero!”

Normally this pundit talked so much that nobody paid attention to what he said. This time, however, people conceded that he might have a point. Wasn’t this a national security issue? You couldn’t just float above a city and expect not to get in trouble. And that smug little expression on his face—what was that all about? It seemed sneaky. And why were us taxpayers paying for these rescue attempts? Where was the FAA during all of this?

The FAA felt the pressure but could do nothing. Their federal aviation regulation stipulated that “over any congested area of a city, town, or settlement, or over any open air assembly of persons, an altitude of 1,000 feet above the highest obstacle within a horizontal radius of 2,000 feet of the aircraft—in this case, Joe—must be maintained.” Dangling Joe (as the media had dubbed him) was within these limits and therefore doing nothing illegal. He wasn’t harming anyone and didn’t appear to be in any danger. Civil liberties groups quickly rallied to protect the man’s right to dangle.

“You can get pulled over by the police for having an air freshener dangling from your rearview mirror,” scoffed Hank Hardwood, “but you can’t get in trouble for dangling from the bleep-bleep sky?”

“I think he’s being remotely controlled,” said one livid caller to Hank’s show. “We all saw how he floated away from the rescuers! Somebody explain that to me!”

“How do we know he’s not a weapon of mass destruction?” said another.

Society sorted into two distinct camps: 1.) Those who loved Dangling Joe, and 2.) Those who hated him. There was a third camp, too, but it was a pretty small camp. These people didn’t love or hate Joe, but they wanted everyone to please recognize that he was significant. They were pretty sure he was a metaphor for something really interesting, and that’s what they argued about, mostly at independent coffee shops.

T-shirts appeared with a picture of the man inside a red circle with a line through it: Just Say No to Dangling Joe!

Marry me, Joe! was another popular shirt.

The arguments intensified. Throngs of demonstrators, both pro- and anti-Joe, traveled from far corners of the country. They gathered beneath him to wave their signs and chant their chants. Joe, Joe, you’ve got to go! And No Joe! No Joe! And Joe, Joe, he’s our man, from Vietnam, China, or Japan! Yaaaay, JOE! Security was overtaxed. Violence broke out. One guy chucked a rock at another guy, prompting a brawl. Hot dogs were stolen, car windows smashed. Someone was caught readying a high-powered rifle with a scope. The National Guard was deployed. The President issued a statement to Dangling Joe, delivered through a P.A. system in seven languages on a giant video screen set atop the 47- story building:

“Greetings, unknown man. This is the President of the United States. We don’t know where you are from or what your purpose is. Nor do we know how you are dangling like that, defying gravity. We don’t understand why you don’t need food or water, nor why you look so pleased. Your presence, however, has caused us as a nation to do some serious self-reflection about our identity. Are we a country who welcomes strangers, whatever their origin, whatever their dangling preferences? Or are we distrustful and fearful of those who are different? Speak to us, dangling man! Tell us what to do. Remind us who we are.”

The President broke down in tears. He was mocked for this roundly in the press. Some people liked his display of sensitivity, but most thought it showed weakness. Whether or not you were pro- or anti-Presidential tears, however, the undeniable result was that nobody talked about what the President had said. His message, his questions, his whole speech: ignored and forgotten. When his term expired, the President failed to even get his party’s nomination for re- election.

The President’s crying jag seemed to trigger the end of the mania. It’s possible that he expressed some deep-seated feelings that citizens weren’t even aware they had. Or that his tears represented the catharsis that the nation required in order to move on.

More likely, though, is the fact that even a phenomenon that breaks all known laws of physics gets boring after a while. People’s necks got sore from staring up like that. They forgot he was there. What once seemed like a monumental moment in human history shrank to a blip on the radar of recorded time. The novelty of Dangling Joe soon wore off. Hank Hardwood set his sights on an outrageous new dance craze. Doc Ready, the man who’d come closest to Dangling Joe, stopped getting interviewed on talk shows. He died a couple of years later trying to rescue a moose trapped on a wayward block of ice. At his funeral he was remembered for the many people he had saved rather than the one man he hadn’t.

I want to make it clear: Dangling Joe didn’t go anywhere. He’s still up there, if you look. But you’ve probably got more important things to do.

Darrin Doyle has lived in Saginaw, Kalamazoo, Grand Rapids, Cincinnati, Louisville, Osaka (Japan), and Manhattan (Kansas). He has worked as a paperboy, mover, janitor, telemarketer, pizza delivery driver, door-to-door salesman, copy consultant, porn store clerk, freelance writer, and technical writer, among other jobs. After graduating from Western Michigan University with an MFA in fiction, he taught English in Japan for a year. He then earned his PhD from the University of Cincinnati. He is the author of the novels Revenge of the Teacher’s Pet: A Love Story (LSU Press) and The Girl Who Ate Kalamazoo (St. Martin’s), and the short story collection The Dark Will End the Dark (Tortoise Books). His short stories have appeared in Alaska Quarterly Review, Blackbird, Harpur Palate, Redivider, BULL, and Puerto del Sol, among others. Currently he teaches at Central Michigan University and lives in Mount Pleasant, Michigan with his wife and two sons. 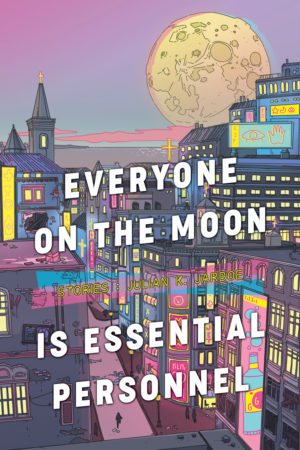 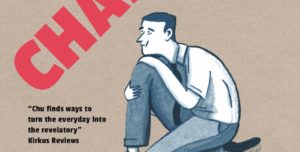 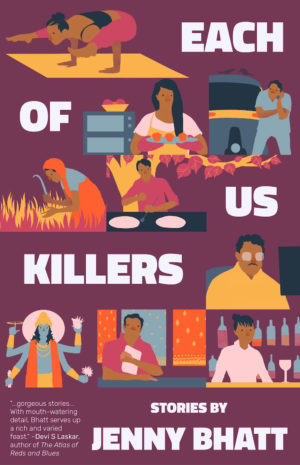 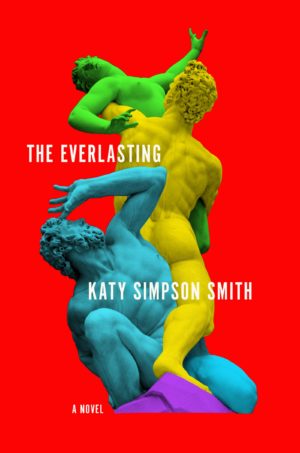 THE EVERLASTING by Katy Simpson Smith